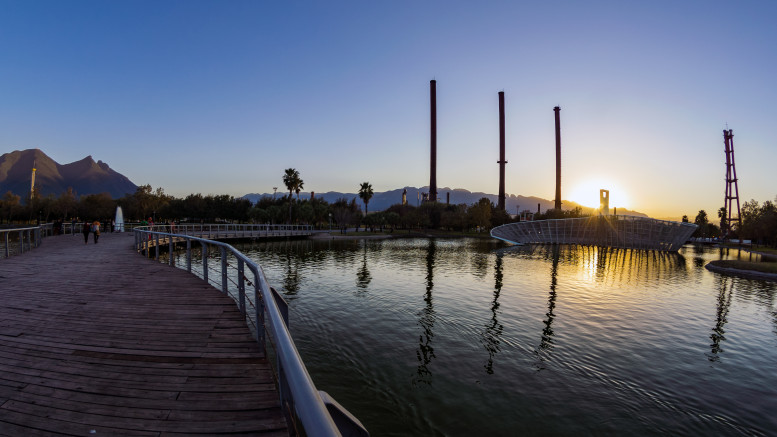 Monterrey, Mexico – Start lists don’t get much deeper than this Sunday’s Ironman 70.3 Monterrey (ok, maybe at Kona. And 70.3 Worlds. And…yeah.) Regardless, a great way to kick off the season in the Northern hemisphere. Magali Tisseyre was back on the start list after winning this race in 2015, while we were looking to Heather Wurtele to put out some major power on the bike. Rinny, although “not in shape” per her social media, is never one to count out. Also on the start list: Camilla Pedersen, Liz Lyles, Emma-Kate Lidbury, Melanie McQuaid, and Sarah Piampiano. In the men’s field, we were watching out for a Ben Hoffman–Ben Collins rematch after Buenos Aires, Cody Beals looking to improve upon his Panama performance, and Kevin Collington, who was 2nd last year. Tim Don, the 2015 champ, would also be on the line, plus Trevor Wurtele, Richie Cunningham, and Drew Scott…get the idea? Can we stop naming names yet?

The first twist of the day came before athletes were even in the water: Magali Tisseyre, defending champ, was a DNS. The men’s pro field took off down the canal – more like a long, fancy swimming pool – with Matt Chrabot leading the way. Chrabot was followed closely out of the water by Sylvain Sudrie, Kevin Collington, and Tim Don, while the women’s swim was led by a lesser-known name in this packed field: 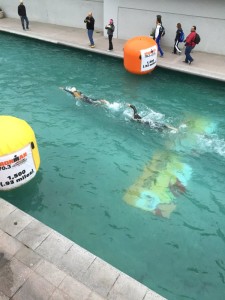 Corrie Kristick, followed out of the water by Celine Schaerer and Camilla Pedersen. Wurtele, Lidbury, and Carfrae had about a minute and a half to make up coming into T1.

Collington kept the ball rolling, taking the lead on the bike (although how much weight does the “lead” carry when the top 10 are all within 30 seconds of each other at 45km??). Closely following him, in order of appearance and separated by mere seconds: Tim Don, Chrabot, Drew Scott, Stuart Hayes, Sudrie, Trevor Wurtele, Vinicio Ibarra, Ben Hoffman, and Richie Cunningham. Wurtele took out the lead at 63km, but didn’t hold onto it – Sudrie was actually first into T2, with 20 seconds on the chase pack that had dwindled to 6 men: Don, Chrabot, Wurtele, Hoffman, Scott, and Collington.

The women spread out just a bit more, with Camilla Pedersen in the lead, but Heather Wurtele making up some serious time – down just 14 seconds at 18km. Following a minute+ back were Kristick and Schaerer, with Carfrae now sitting 2 minutes off the lead. It was looking to be a good day for the Wurteles, as Heather took over the lead in the women’s race at 45km and soon gapping Pedersen by nearly a minute. Wurtele was the first woman off the bike, and had stretched her lead over Pedersen to 3:10.

Fun fact: Heather & Trevor Wurtele both posted the fastest bike splits of the day. Talk about a power couple! (Get it? Get it?? #badcyclingjoke.)

Tim Don moved into the lead just shy of 5km, leaving Sudrie and Wurtele close on his tail. Don continued to inch away from his chasers on the run, while Trevor Wurtele and Chrabot seemed locked in a battle for 2nd/3rd at 17km. Trevor was able to pull away before the end, ultimately besting Chrabot by 43 seconds.

Meanwhile, Heather Wurtele was still crushing the run halfway through, with 4 minutes over Pedersen, 8 minutes over Carfrae, and Sarah Piampiano still trying to run down Rinny another minute back in 4th. No surprises before the finish line – Heather had it locked down, and was followed by Pedersen, Carfrae, Piampiano, and Liz Lyles in 2nd – 5th.

BAM!! One of our favorite things is having great races at the same event! Thrilled to star… https://t.co/pmD0GbSxKz pic.twitter.com/LiEfV1qCZT

Adrienne is a MD/PhD in Neuroscience researching stress, your brain & the neuroscience of mindfulness training. She is also a fairly decent triathlete/runner/writer and an average ultra-distance swimmer, if there is such a thing. Visit her blog: http://www.adriennetaren.com/. Follow @SeeSpondyRun

I rode with Macca at Challenge AC