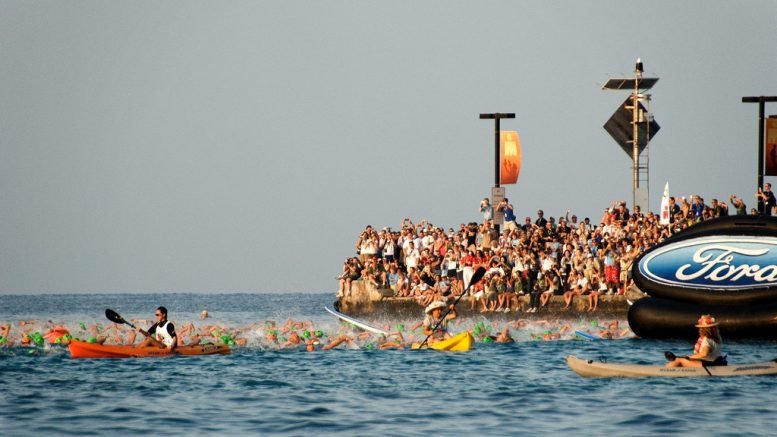 You probably haven’t heard—the news is subtle and hard to find—but it’s Kona race week. Now you could read one of those Kona advice articles with tips from pros or winning coaches or triathlon magazine editors who have been to Hawaii every year since someone first decided to follow their swim with a bike ride and then a run. But why take advice from experts when you could take advice from me, a random triathlete. Since this is my first time ever being to the town of Kona, much less starting the race, I feel wildly qualified to tell you how to prepare.

Here are the most common questions I’ve been fielding in a special Kona edition of Ask a Random Triathlete.

So, you’re doing The Ironman?

Kidding. But not really. This is the single most common question I’ve gotten over the last month of being on the big island. Followed by: How far is that? I don’t know how you guys do it? So you can swim a whole 2.5 miles?

Far. You don’t ever think about it all at once. And, yes.

Now, these are the actual questions triathletes keep asking:

How do I heat acclimate?

You go back in time and worry about that when it would have made a difference.

Oh, you mean now? Now, you just get on with the goddamn thing, suck it up, and hope for the best. Stay cool beforehand, put on lots of sunscreen, drink enough water, and take in electrolytes. This isn’t rocket science. It’s actual normal science.

What about the wind?

Buy a power meter and stick to it. If it takes everyone longer in the wind, then what does it matter if it takes you longer too.

And don’t crash, especially near me.

There are a lot of intense, fit-looking people. I feel like I should also be running full-speed down Ali’i every morning to prove to everyone else that I deserve to be here.

Of course you do. It’s chaos out there. Why can’t everyone reach a consensus about whether we should all run on the right or the left, with or against traffic? And, despite what you might start to think is normal purely from sheer volume, the shirtless heart rate strap look is never a good one. I mean, do whatever you need to do, but just FYI.

Here’s the secret though: Everyone is trying to get into everyone else’s head, hoping somehow when it comes down to it the other athletes will see them out on course and think, ‘Oh man, I saw him running down Ali’i really fast last week, guess he’s going to win, I might as well give up.’ Except, that’s not going to happen, right? No one is going to remember you. No one is going to care. So it’s only all in your own head.

That means you only have to manage your head, not anyone else’s. You’ll feel a lot better if you tell yourself that every person who passes you during a workout is someone you’ll pass on Saturday. Or, just tell yourself it’s OK because they probably suck at life. Either way is likely accurate.

How do I do all the Hawaiian tourist-type stuff and still get race ready?

Unless you’re in my age group. In which case you should definitely climb to the top of a volcano. I hear it’s spectacular.

Should I buy lots of new stuff at the expo to try for the first time during the race?

Probably. You should probably do everything you see other people doing, because clearly you’ve never done a triathlon before.

This shit is freaking me out.

Look, Kona is a tough race. Turns out they weren’t lying about that part. I had sort of thought they were. But it’s still just a race. Unless you’re a lottery winner, you have, by definition, already done at least one Ironman and you’ve done it somewhat proficiently.

Just do that again. It might go terribly—you can’t control everything—or it might not. But you already knew that, so there’s no point in freaking out about it.

Where is the after party?

Wherever I am. And it starts five minutes after I finish. Whether that’s at 5:30 or 10:30 p.m. Either will require a lot of drinking.

Kelly is a reporter and writer in the San Francisco Bay Area. She quit triathlon for a few years, because triathletes can be annoying, but now she's back into it and only hanging out with the non-annoying triathletes. She blogs about stuff at Sunny Running.

Ask a Random Triathlete: So Many Categories, Buckets, and Aerobars

Ask a Random Triathlete: Racing Post-Break-Up, and Latex or Butyl?