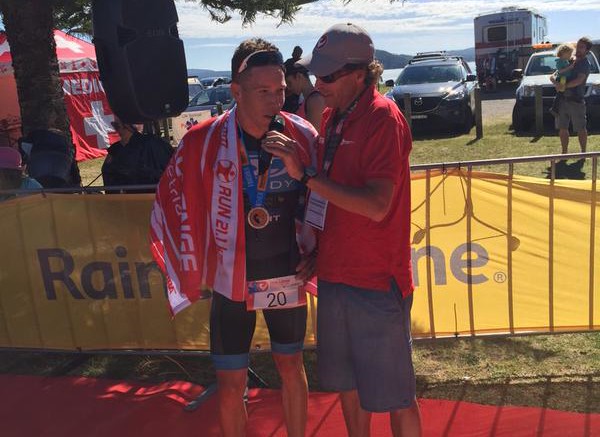 Challenge Family returned to Bateman’s Bay, about three and a half hours south of Sydney, for another running of this half-distance event with $35,000 AUS on the line (split evenly amongst the men and women). The bike course features but just a few punchy climbs at the beginning and end of the ride; with that in mind, pre-race expectations were for fireworks in the swim and on the run.

Thirteen pro women took to the starting line, with pre-race favorites pegged as Yvonne Van Vlerken, Liz Blatchford, and Ms. Honey Badger,  Mary Beth Ellis. Ellis and Blatchford distanced themselves during the course of the swim, with Ellis taking the swim prime by one second over Blatchford (27:06 and 27:07, respectively). A chase pack of Polly Hendy, Kate Bevilaqua, and Michelle Gailey arrived to T1 2:50 seconds down to Ellis and Blatchford.

But Van Vlerken was nowhere to be found. Finally, four minutes down, she arrived out of the water. Van Vlerken was 10th and would need to unleash fury on the bike and run to make up the deficit.

Ellis and Blatchford continued their march up the road on the bike course. The course features three punchy climbs in the first 15K, and then flattens out to the turnaround before returning over the same series of hills. Neither was able to separate much from the other.

Meanwhile, behind them, Van Vlerken began mowing down competitors with efficiency on her way to a race-best 2:29:11 bike split, managing to arrive to T2 within a few seconds of Ellis and Blatchford. Bevilaqua laid in wait to stalk for a podium position if one of the top 3 had overextended themselves in the first two disciplines.

Blatchford and Van Vlerken duking it out on the run.

As the run unfolded, it appeared that it was the Honey Badger who had bitten off a little more than she could handle on this day, as Ellis faded. Van Vlerken and Blatchford did battle over the final kilometers. In the end, Van Vlerken took a sprint finish for a four second margin of victory over Blatchford. Ellis managed to hold onto third. Bevilaqua could not move up, but she did not relinquish her hold on fourth. Sarah Crowly ran her way into fifth with a 1:24:55 run.

The men, too, had thirteen athletes vying for ten paying positions on the day. Jake Montgomery took the swim prime with his 25:09 effort. Sam Appleton, Joseph Lampe, Nick Kastelein, and Peter Robertson all were hot on Montgomery’s heels, finishing their swimming within 40 seconds of the leader.

This race soon became a day of trying to chase Appleton, as he vaulted himself into the lead on the bike. His 2:10:26 was 8:07 faster than the next-fastest male bike split, which belonged to Robertson. Montgomery hung tough with a 2:19:21 to arrive to T2 in a podium position. Lampe and Kastlelein, meanwhile, slid backwards on the bike, hopeful that their run efforts would propel themselves back into top-money contention. 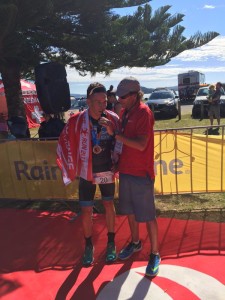 Appleton, meanwhile, continued his relentless domination of the event on the run. Although his run was only good enough for seventh fastest on the day, his 1:19:55 only yielded two minutes of his lead back to the field. Appleton crossed in 3:57:29, the only pro male to break the four-hour barrier on the day.

The real drama was behind him, as Robertson, Montgomery, Per Bittner, Kastelein, and Ryan Waddington all battled for position and prize money. Robertson was able to hold onto second with a closing 1:16:55. Bittner moved himself into third on the day. Kastelein ran himself up into fourth. Waddington was able to edge himself past a slowing Montgomery to take fifth.

All images courtesy of Challenge Family.

Ryan Heisler is a digital marketing specialist with a specific focus on search engine, social media, and content marketing. He is also a veteran of the specialty running and triathlon industry, having spent a decade managing stores in New England and the mid-Atlantic. He is also a former sports talk radio host at WERS-FM in Boston and holds a law degree from the University of Maine School of Law.

Drama at the 2015 Asia-Pacific Ironman Championship