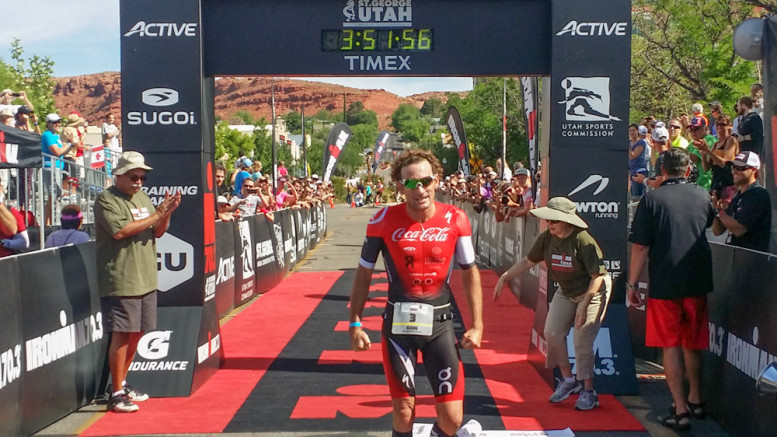 St. George Utah is fast becoming a key race destination in the esoteric world of the professional triathlete.  Now home to the North American Professional 70.3 Championship, St. George was at one time a 140.6 race.  Originating in 2009, and plagued by some biblical weather that caused havoc on the swim (with at least one life claimed in the early years); and a nasty reputation as an incredibly brutal course; it was mercifully shortened to a half-Ironman in 2013.  The event also took on the honor of being the North American 70.3 Pro Championship venue, stealing that title away from Ironman Texas 70.3.

St. George’s reputation and popularity has grown since then, to the point where it is now a key event in the carefully groomed calendars of many professional triathletes as they strategically execute their racing and training blocks in the early season.  This year’s Pro Start List is a testament to that popularity.  With names showing up like a Who’s Who listing of the sport’s hottest stars, it out-rivals all the other popular races taking place this weekend.   With names like Brent McMahon, Tim Don, Ben Hoffman, and Andreas Raelert topping the men’s list; and Meredith Kessler, Rinny Carfrae, Jodie Swallow, and Heather Wurtele on the women’s roster this year’s starting line will be a sport’s photographer’s dream.  Sadly a couple of high profile starters have withdrawn shortly before race day arrived; top favorite Sebatian Kienle took ill in the hours before the race and is wisely sitting this one out, and Magali Tisseyre is out for reasons unknown at press time.

As mentioned, St. George is in direct calendar competition with many other great races, but even with the majority of the world’s pros here today; we won’t see Terronse Bozzone who is racing IM 70.3 Busselton in Western Australia, or Smokin’ Joe Gambles – racing in France at the Pays D’Aix 70.3, nor a notable group from the St. Croix 70.3 (Richie Cunningham, Drew Scott and Andrew Yoder).  And the legendary Wildflower event in northern California has pulled away Jordan Rapp and Matt Reed.  And one lone 140.6 on the calendar this weekend has champs Mel Hauschildt and Hillary Biscay away for the weekend down under at the IM Australia event (which Haus handily won by the way with a 2 minute 7 second margin, congrats to her!)

In a notable and progressive move, the race organizers made a last minute decision to start the race 10 minutes early, thus acquiescing to the call for a fair start protocol, finally allowing the professional women a better racing environment by allowing more separation between the male pros and the 2,800 age groupers.

Today’s swim, as in past years, takes place in the clear cold waters of Sand Hollow Reservoir, technically in another town down the road from St. George, aptly named Hurricane Utah; and requiring all athletes to take a short bus ride to the starting line.

As we saw at the Asia-Pacific Championship back in March, new technology is at play here.  Live tracking of competitors is becoming mainstream; with this event making it mandatory for all pros to wear a GPS tracking unit for the bike and the run (voluntary on the swim).  Great technology from WTC, and I can see how this level of engagement can eventually lead to more mainstream coverage of these events, so that someday we can watch this stuff on more traditional broadcast media like the major television networks.  Amazing technology, but still plagued by significant delays and dropouts during today’s live coverage.  Here’s to hoping they keep up the development and rollout of this potentially powerful game changer.

Today’s race featured clear weather, which is always a concern here at St. George, as previous years have not always been so kind.  Morning temps started in the low 60’s but would potentially climb to a high of 90 in the afternoon.  The swim start was a bit more relaxed than usual due to the bigger spread between the pro men and women and the age groupers.  The swim course would be one loop, counterclockwise, around a large island in the middle of the reservoir.

There were no surprises in the swim, and we saw a tight pack exit at just under the 23 minute mark led by Todd Skipworth, followed in quick succession by Jon Bird and Brent McMahon crossing the mat in 23:05.  In the women’s race, as expected, defending champ American Meredith Kessler led the lead pack in exiting first in 25:10 followed by Jodie Swallow, Mary Beth Ellis, and Annabel Luxford 5 seconds back.  Kessler has taken top podium spot here at St. George for the past three years, the first of those as a full 140.6 Ironman race.

After the swim, the course would take the athletes through some of the southwest’s most stunning terrain.  Though a desert region, the landscape is filled with color and mind-blowing geologic diversity.  These carbon fiber bikes would set an odd juxtaposition as they sped alongside rock outcroppings that have been weathering in the desert sun for billions of years.

During the early stages of the bike there was a fair bit of strategic positioning among the male leaders, while keeping a blistering pace, with Ben Collins, Brent McMahon, Tim Don, and Andrew Yoder jockeying for the first 4 positions.  They would continue this leap-frogging all through the morning, into the long four mile climb through the red rocks of Snow Canyon. But by T-2 it was McMahon first off the bike in 2:35:51 followed two seconds later by Collins, with Yoder and Don coming in 30 seconds back and 71 seconds back respectively. 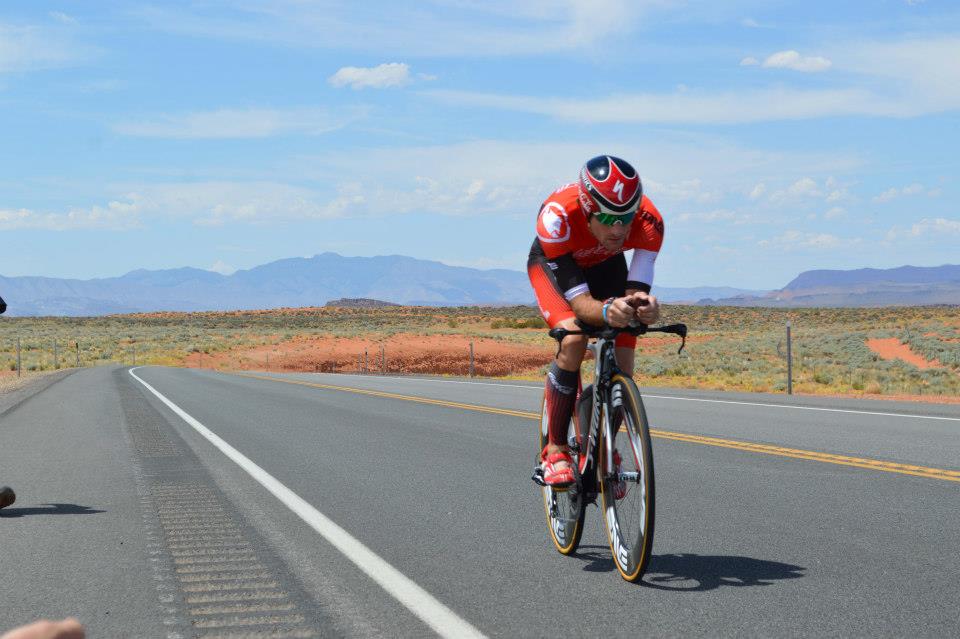 In the women’s race Kessler led early, with Luxford, Swallow, and Kaye in constant pursuit.  They too would all hold tight, while jockeying for position and maintaining speed.  At T2 Swallow was first through the gate in 2:53:26, with defending champ Kessler right on her heels, and Luxford and Kaye coming in within the next minute.

Early in the men’s run McMahon led Don, Collins, and Andreas Raelert.  Eventually Tim Don would take the lead from McMahon, add on a minute and half and finish first in 3:51:56.  McMahon and Raelert would take the remaining podium spots in 3:53:22 and 3:53:39.  After having hung with the leaders through the first half of the run, by the end of the day Collins had faded to 10th.

In the women’s run contest, as expected Kessler started out leading, followed by Wurtele, Swallow, and Luxford.  After the halfway point Wurtele took the lead and held off the other three ladies all the way to the end, ultimately gaining a full minute and a half over Kessler.  Quite a showing of great fitness and skillful strategy since she had been 1:41 behind the lead coming into T2.

In speaking with Tim Don later in the evening about his race strategy he gave some insight into his day.  “I went into this with a goal of swimming in the front pack which I was able to do and came out in the top 5 or 6; and then ride hard for 5 or 6k to keep towards the front of the pack, which I did until there were only 4 athletes remaining, at which point it became a tactical game; that is until I had problems with my bike.  I eventually had to stop and fix it.  My gears started jumping and then my chain came off and had wrapped around my derailleur, so I had no choice but to stop.  Luckily I got that fixed and only lost about a minute and a half, but it all worked out for the best.  I guess I’m a bike mechanic now, too!”

Tim’s next race is his hometown race at the Boulder 70.3 in June, then possibly Vineman 70.3 in July, then onto the 70.3 Championship in August, all leading up to Kona in October.

In speaking with Heather Wurtele she said “I was thrilled to take the win, especially after placing 3rd for the past two years. I knew the course well, having won this race back in 2010 and 2011 when it was a full 140.6 event.  So we had 5 really strong swimmers in the lead and I worked hard to minimize the gap, which worked, then I had to ride really hard.  My next race is Ironman Texas (North American Championship) in two weeks.  And so apparently winning a 70.3 a couple of weeks out from a full Ironman works well as a training strategy for me; in the past two years I’ve won Coeur d’Alene having won a 70.3 a couple of weeks out both times, so I’m hoping that works for me again at Ironman Texas.”

And so another St. George 70.3 is in the books, and the pros have their first US early season event under their belts as they begin ramping up for the remainder of the season.  Perhaps the draw for them to this arid spot is the challenging course, or maybe the $100,000 purse, or perhaps it is the location; with St. George sitting at the extreme southwest corner of Utah, just above the Arizona border, it is just up the road from Las Vegas and around the corner from Zion National Park.  Though a day’s drive from the the home of many of these pro racers in Boulder Colorado, it becomes the center of the triathlon world on this weekend in May. 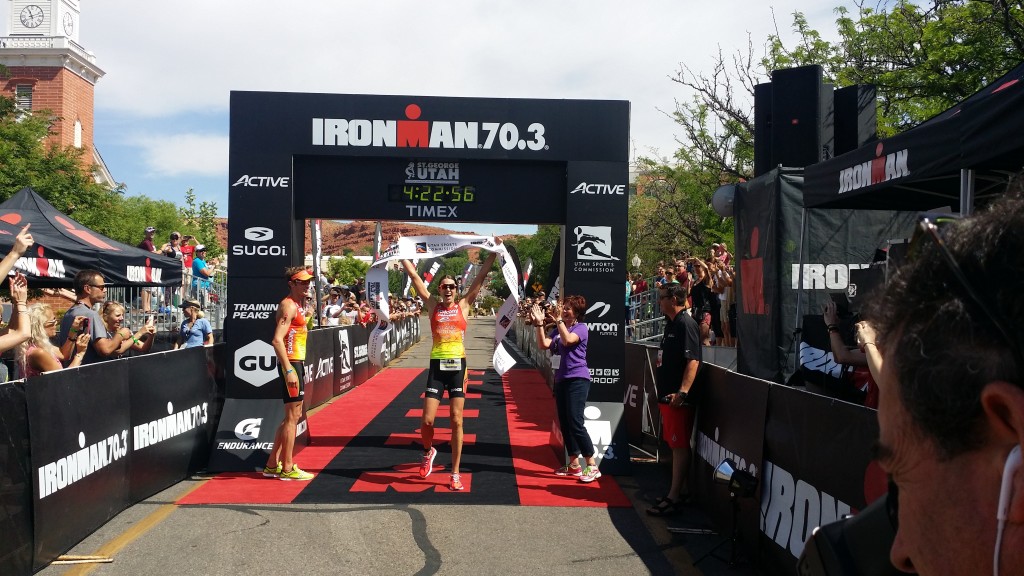 All photos used with full permission. All finish line photos by Ladd Egan.

Up until Randy Cantu got this sweet gig writing for TRS Triathlon his greatest claim to fame was that he has read more blogs written by Ray Maker of DCRainmaker.com than anyone else in the universe. You see, Randy is Ray's long time editor (and occasionally writes for DCRainmaker.com). So with that pedigree he had no where to go but sideways, here to TRS Triathlon. Randy splits his time between Augusta GA and Boulder CO, an odd combination, but sports writing is an odd business anyway. In real life Randy is an actual certified Project Manager for a software company, which pays the bills, but his heart is in the world of endurance sports. So that's why he also does quirky things like make drone videos of endurance sports events, and as soon as the FAA gets off his ass he hopes to turn that into a full time business. You can find out more about Randy at randycantu.com. Follow him on twitter: @cantucan.