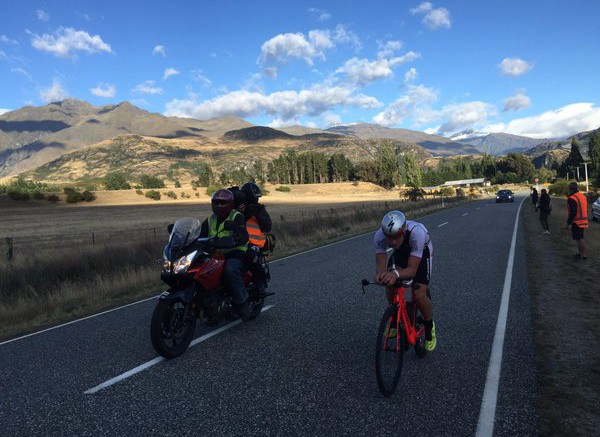 The 10th anniversary of Challenge Wanaka and the 10-second anniversary of you learning where that is. Lake Wanaka and its correspondingly named lakefront town are on New Zealand’s South Island, fyi. Think: mountainous peaks, green hills, and glacial lakes in the valley.

The course for the full don’t-call-it-an-Ironman distance race is fittingly picturesque and wild, as is to be expected. Athletes start with a two-loop swim in the lake, which gets windy and fairly choppy for a lake. (Race morning saw the pros being pulled off the start line for a ten-minute delay as wind-blown buoys were dragged back into place.) They then ride two loops along the lake edge and through the hills for a total of a bit over 3,000 feet of elevation gain. Finally, they hit the run, which is over 60% on smooth trails and (you guessed it) two loops.

The pro field is relatively small for this early season “full-distance” race. But still. Graham O’Grady is no joke, though he just started to get his Ironman legs under him at the end of last year. Maik Twelsiek definitely knows how to bike. Plus there are lots and lots of Australian and New Zealand athletes in the mix, like Dougal Allan, who lives in the area, and Dylan McNeice.

On the women’s side, many-time champion and course record holder Gina Crawford loves her home course. But Yvonne van Vlerken and Laura Siddall both hoped to finally upset her winning streak here. And, again, you have plenty of local racers and the locals take this quite seriously: 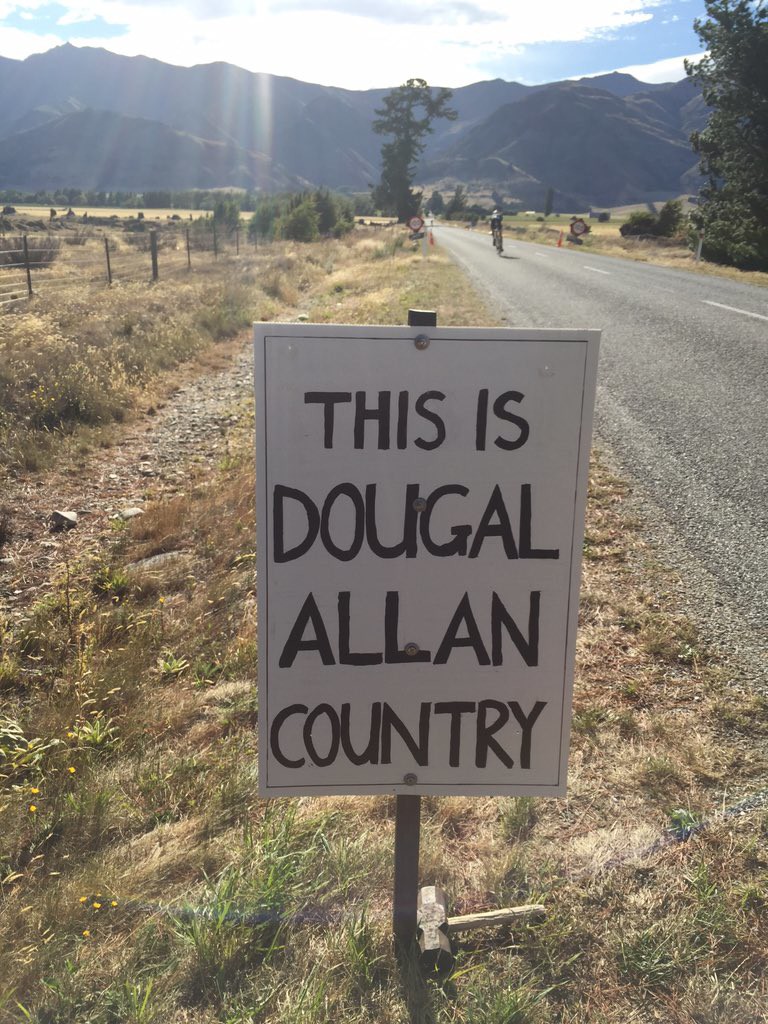 As mentioned, the swim was a bit of a chop-fest, which favors the strong and savvy swimmers, and typically breaks things up. 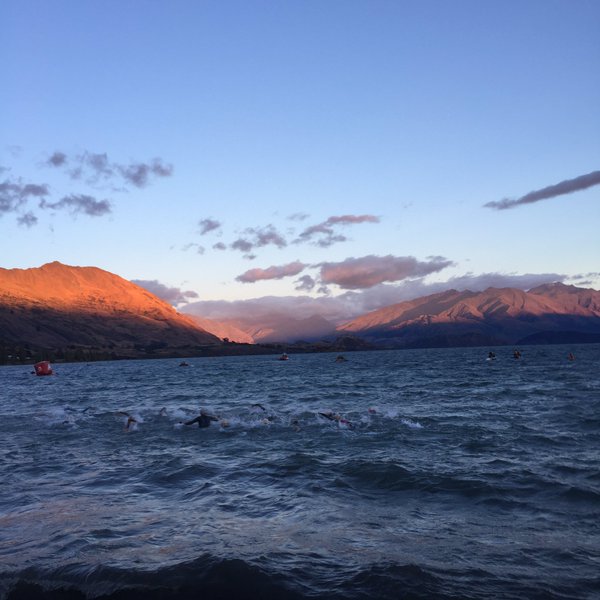 This meant Dylan McNeice, who has set the swim course record previously here, managed to put a two-minute gap on his chasers with his 43:30 swim. Next out of the water was Graham O’Grady, and then another three minutes behind him came Maik Twelsiek, Sean Donnelly, and Per Bittner.

McNeice worked hard to hold onto his lead, but super-biker Twelseik still managed to close just after halfway. Meanwhile, behind them, Dougal Allan was charging hard to make up time. Spoiler: it worked. After a 4:37:57 ride, Twelseik came into T2 with a lead of 3:30 over Allan. But Allan had ridden a 4:36:06 to gap McNeice by seven minutes, and still had his sights set ahead.

Twelseik couldn’t hold off that kind of determination and Allan soon took the front spot on the run. A drizzle turned into heavy rain, but nothing was going to stop Allan finally claiming the win in front of his hometown fans. He ran it in with a 2:57:23 marathon for a wet victory in 8:31:53. McNeice paid for his early effort at the front when Matthew Russell passed him just after halfway through the marathon. Twelseik held on to cross the line second (8:40:48), just three minutes ahead of the fast-moving Russell.

The women stayed slightly more together in the water, because, uh, I have no idea, because women? Anna Cleaver was out first in 54:19, but just over ten seconds back was a group of the big names: Gina Crawford, Laura Siddall, Yvonne van Vlerken. April Gellatly was another 20 seconds behind that.

Once they were on their bikes, those big names took control of the race. Van Vlerken was soon at the front, followed by Crawford, Siddall, and local Simone Maier, who was moving up. As the winds picked up later in the day, though, there was at least two nasty crashes — Maier and Alyssa Godesky, who ended up in the hospital with stitches — and a tough shaking out of the field. Siddall moved to the front (despite having to jump off her bike, fix her chain, and jump back on at one point) and Crawford fell behind.

In that mess, Siddall rode 5:12:29 to get off her bike first, three minutes ahead of van Vlerken. But she just couldn’t stay in front of the former Iron-distance world record holder. Van Vlerken took the lead and, although Siddall fought hard to stay close, the win was secured after that. Far behind them, there was a battle for the third podium spot as Gellatly tried to run fast enough to make it to the end before Cleaver or a closing Julia Grant. (Some speedy age groupers got themselves in the mix here too. Good for them and clearly they’re fast enough to compete in the pro race if they want to, but I’m always a bit ambivalent about whether they count in the overall leaders. Since it’s a different race with a different start and different rules, it’s not really the same race, right?)

In the end, van Vlerken’s 3:12:01 marathon got her to finish line as the first woman (9:26:50) and seventh overall, with Siddall just four minutes behind. It was a long wait for third, but eventually Grant claimed the last podium spot with a 3:32:45 run in the rain and wind, which was nearly twenty minutes faster than fourth-place Gellatly. No word yet on what happened to Crawford.

Kelly is a reporter and writer in the San Francisco Bay Area. She quit triathlon for a few years, because triathletes can be annoying, but now she's back into it and only hanging out with the non-annoying triathletes. She blogs about stuff at Sunny Running.

Drama at the 2015 Asia-Pacific Ironman Championship