The penultimate 2015 World Triathlon Series race was held in Edmonton, Alberta in horrid conditions on September 6, 2015. I was there covering the race for TRS Triathlon and I can confirm that it was cold, wet, windy, and just plain miserable. Barrie Shepley’s theory that “big boys” would fare better in the cold may have been technically correct, but I am certainly a “bigger boy” than any of the men or women in the field and I was freezing.

I'm wearing a rain coat, a sweater, a t-shirt, and 30lbs of fat, and I'm freezing my balls off. #WTSedmonton

Next week I’ll be publishing an article detailing my experience as an amateur triathlon journalist being thrown into the thick of it at a high profile race (Spoiler: I almost didn’t embarrass myself). Also, I did audio interviews with Javier Gomez Noya, Vicky Holland, Richard Murray, Barrie Shepley and others, so look for those on the next TRS Radio podcast (unless Ben thinks they’re shit).

Also, be sure to check out Kelly O’Mara‘s race recap and the highlight videos for the men and women. 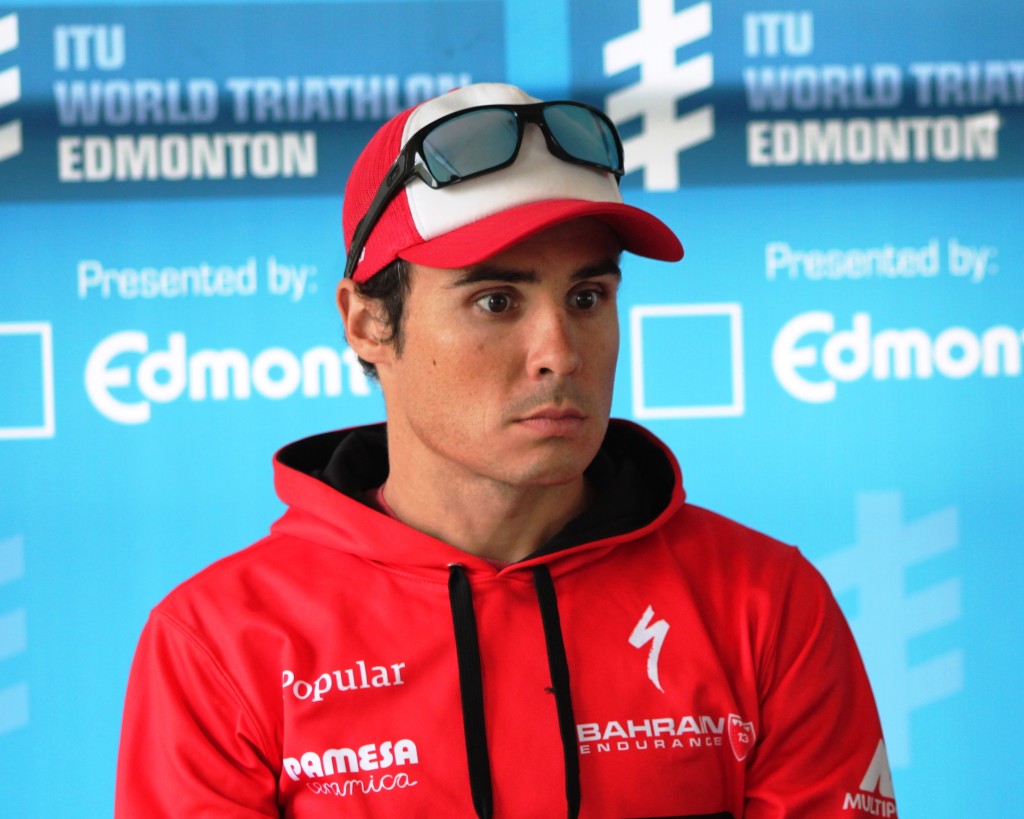 At the Friday press conference Javier Gomez Noya looked exhausted and described WTS Edmonton as a “training race.” When I asked him if he was tired he said “I’m always tired. I’ve been tired for 10 years.” Ahhh, the glamorous life of a professional triathlete!

Like Gomez, Vivky Holland’s sights were set squarely on Chicago, where she needs a podium performance to secure an Olympic berth for Great Britain. (Big thanks to photographer extraordinaire Rich Cruse for this photo of Vicky and myself.) 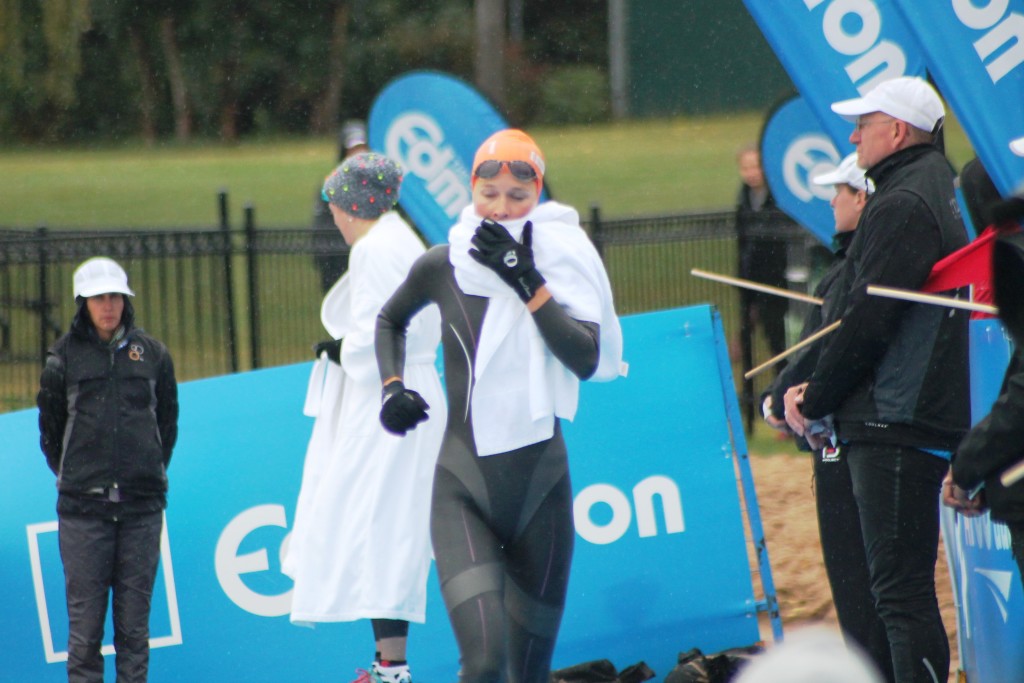 Holland came to the swim start sporting a toque and bath robe, while Rachel Klamer used a towel and gloves to stave off the chilly (7C /43F), wet, and windy conditions.

Diving in the water offered the women a respite from the conditions.

Vicky Holland executes a flying mount coming out of T1.

The weather really took its toll on the bike and all the racers looked uterly miserable for the 20km, 4 loop course. The one exception was Flora Duffy, who backed up her reputation as the most badass cyclist on the circuit by grinning throughout.

Ashleigh Gentle and Kirsten Sweetland attempted to bridge up to the lead group of 15 riders. Ultimately they weren’t able to close the gap and rode most of the 20km as a duo. Their efforts were rewarded with top-10 finishes after both posted solid run splits. 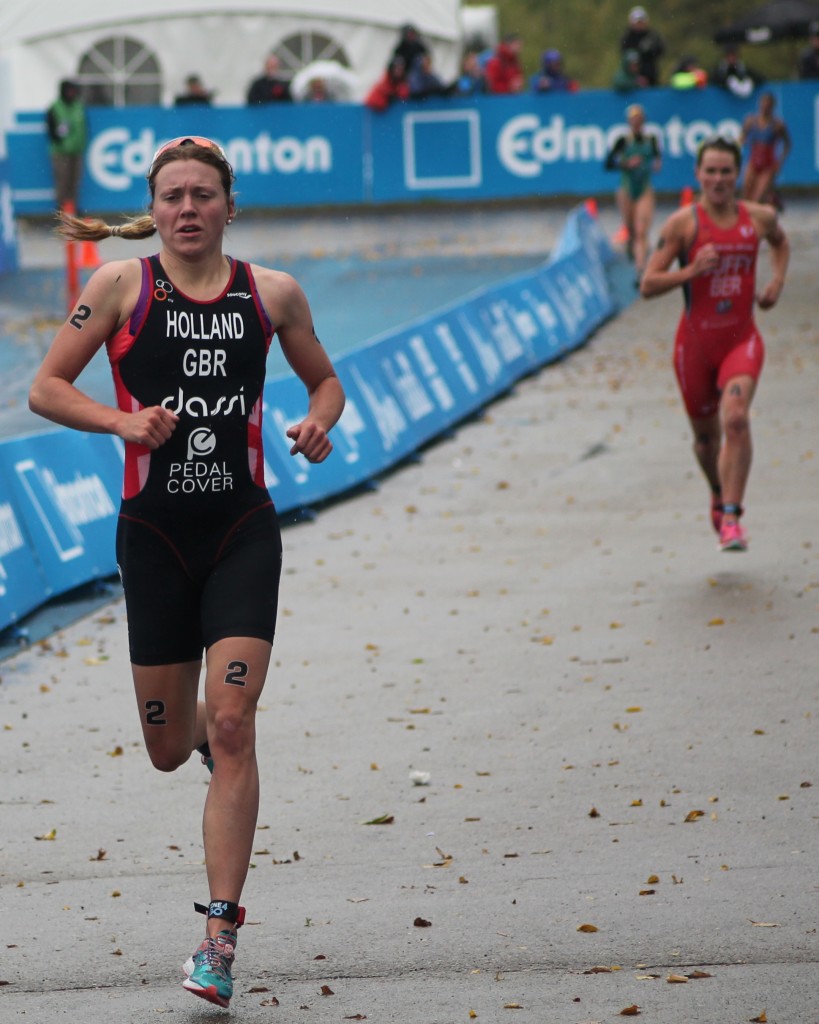 The women’s top 4 of Holland, Duffy, Backhouse, and Routier established itself on the first of 3  laps. 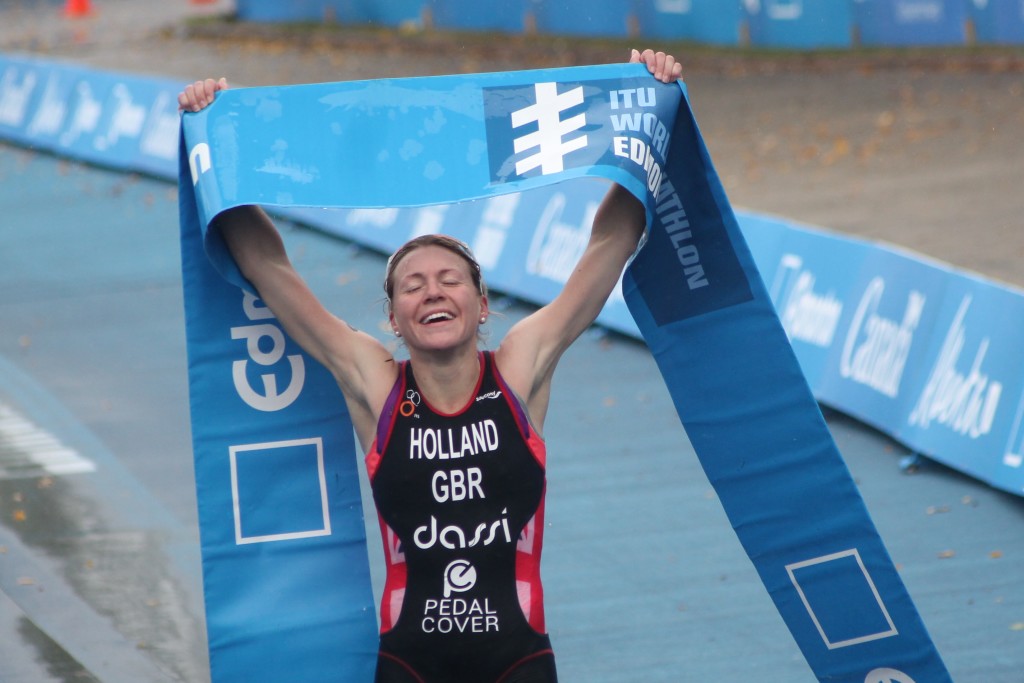 Vicky Holland was in control all day and was very happy with her second win of the season in the harsh conditions. Post race Vicky wrapped herself in 3 blankets to speak with the media. 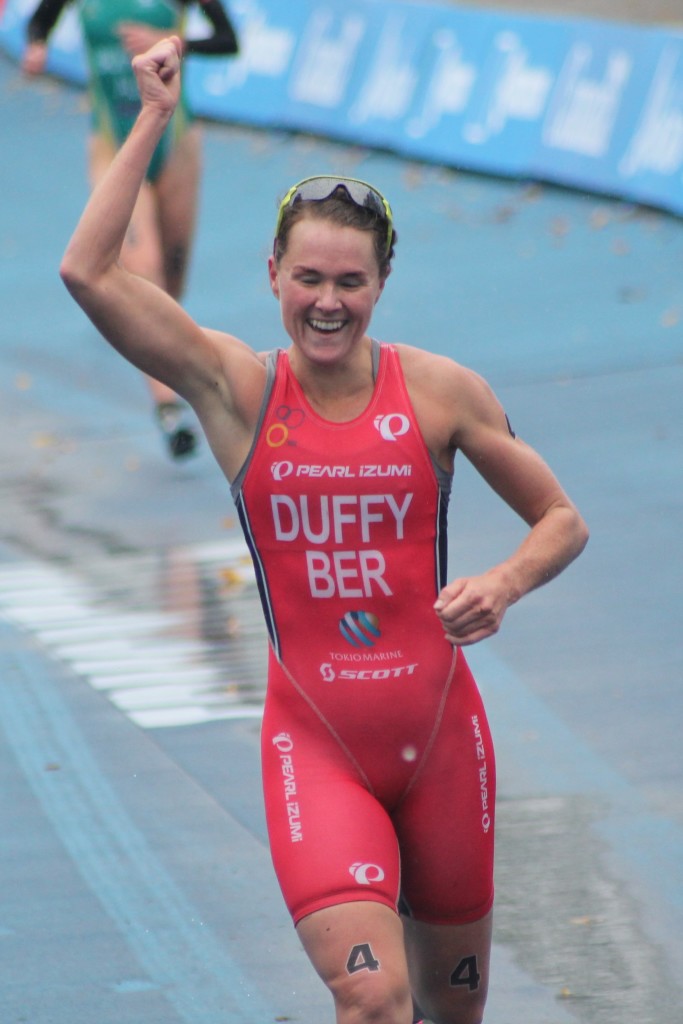 Flora Duffy was pleased with her second podium of the year. Unlike Adu Dhabi where she biked incredibly well and held on during the run, in Edmonton she came into T2 with the pack and ran away from all her competitors save Holland.

Gillian Backhouse rounded out the women’s podium with a breakthrough race. 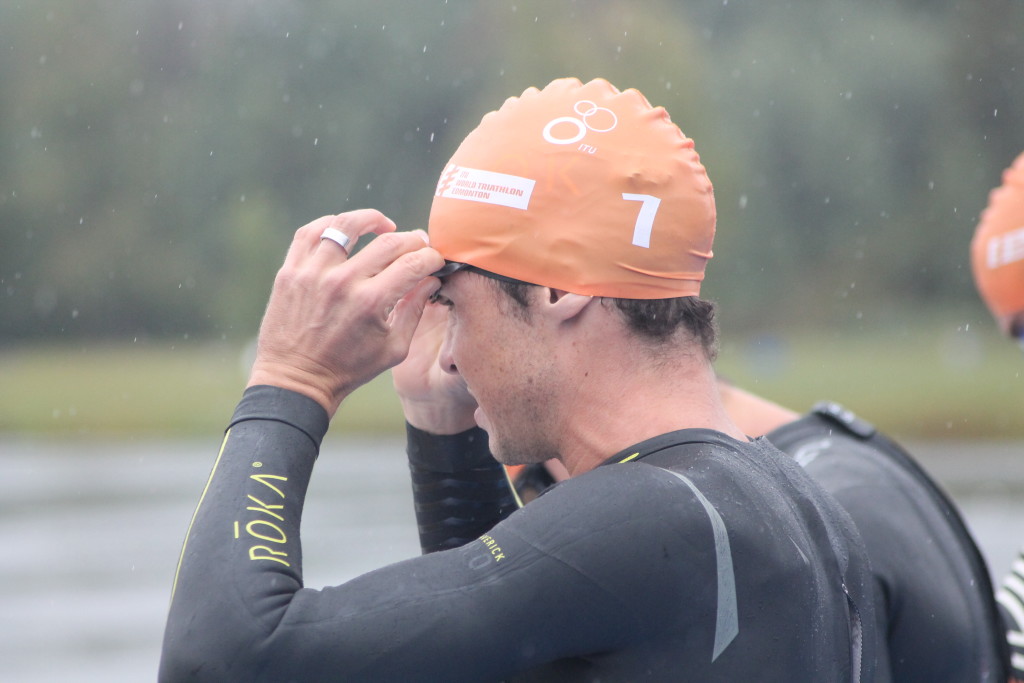 Gomez looked relaxed but focused before the men’s race race.

The swim in Edmonton was even more frantic than usual with a 90 degree left turn less than 200 meters in. 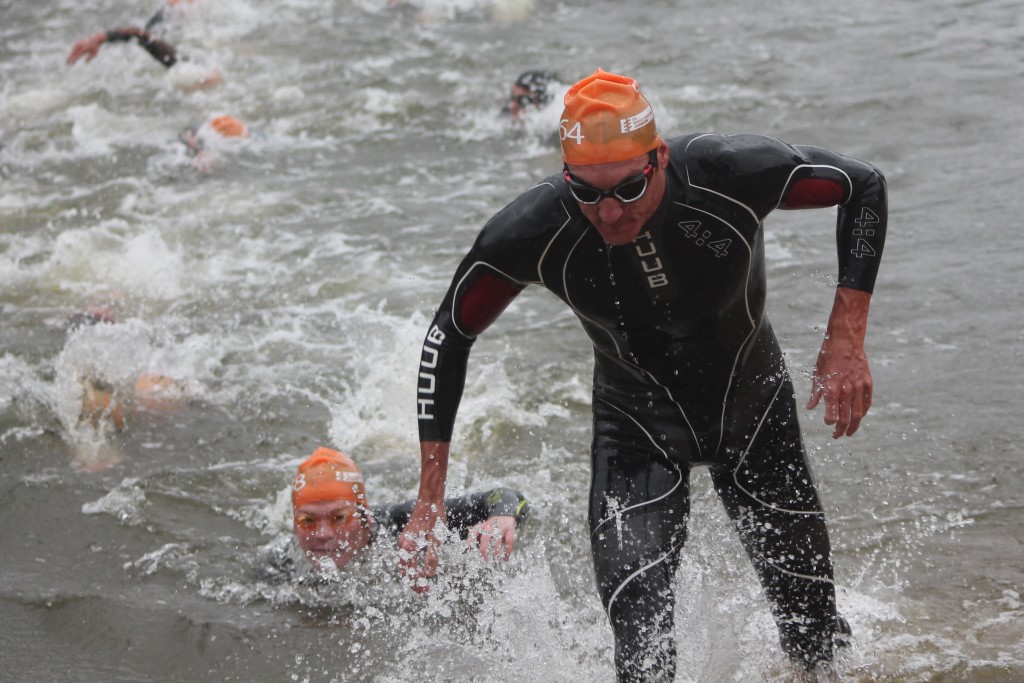 French swim specialist Raoul Shaw was first out of the water with 2015 Escape from Alcatraz champion Eric Lagerstrom hot on his heels.

Eric Lagerstrom backed up his solid swim with a solid bike, coming into T2 in second. Be sure to check out Eric’s race recap featuring video from his bike-mounted cameras.

A very large group of over 30 riders came into T2 together, with all the pre-race favorites well positioned to take control on the run. 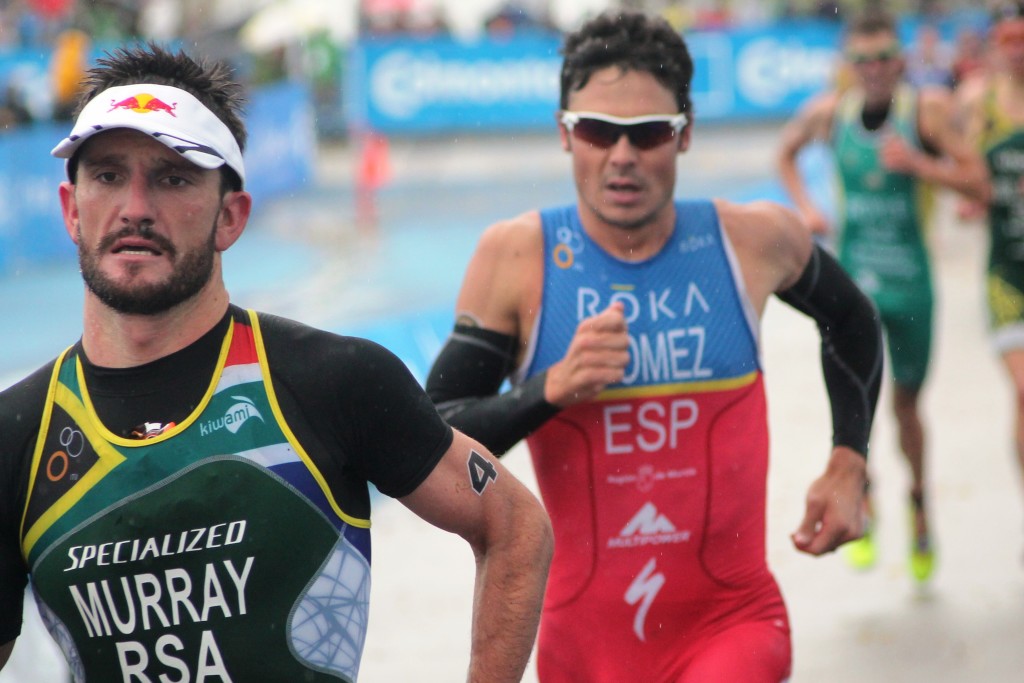 Richard Murray took the lead early in the run and only Gomez was able to stay with him. 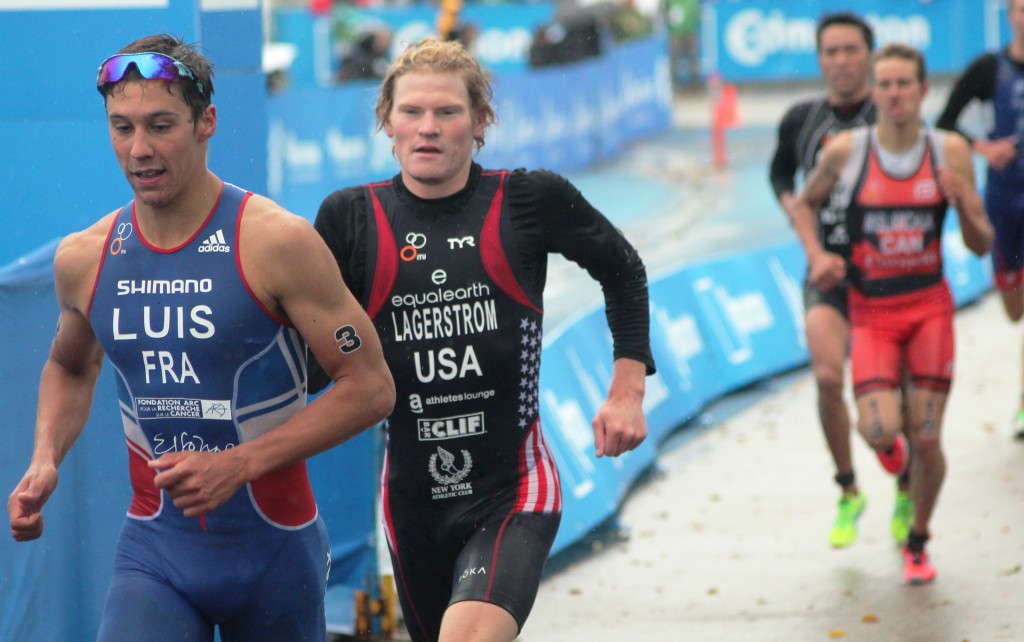 Pre-race favorite Vincent Luis posted the 3rd best run on the day but wasn’t able to crack the podium.

Murray was ecstatic with his first WTS win in 3 years, while Gomez was very content with his “training race” turning into a silver medal and padding his lead atop the WTS ranking.

All photos belong to James Lange and TRS Triathlon and can only be used with permission (with the exception of the picture of James and Vicky Holland which was used with the permission of Rich Cruse) . I took nearly 1000 photos at the race, so if you are a pro and would like to see if I have any good shots of you, e-mail me at james@trstriathlon.com and I’ll have a look.

James Lange is an age group triathlete living in Rocky Mountain House, Alberta. He aspires to be one of the top 500 amateur triathlon journalists in Western Canada. You can reach James at james@TRStriathlon.com. Follow @james_lange !function(d,s,id){var js,fjs=d.getElementsByTagName(s)[0],p=/^http:/.test(d.location)?'http':'https';if(!d.getElementById(id)){js=d.createElement(s);js.id=id;js.src=p+'://platform.twitter.com/widgets.js';fjs.parentNode.insertBefore(js,fjs);}}(document, 'script', 'twitter-wjs');