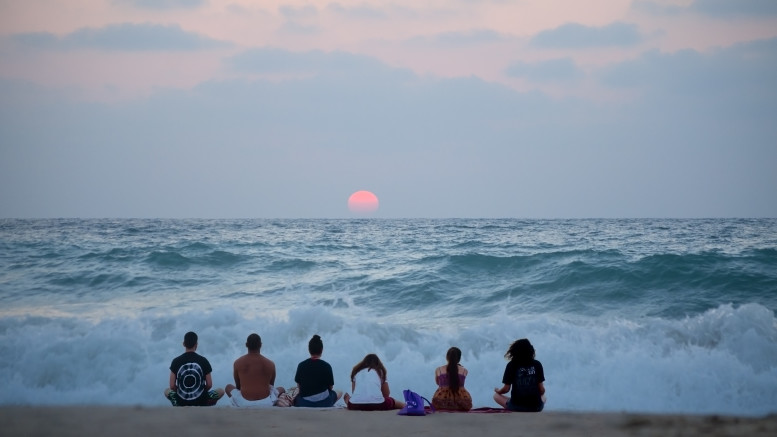 “We all meditate. When I first went to an actual meditation class… the same feeling that you have when you want to stop in a race, when you think you’re going to quit at the end of an interval or whatever, that – to me – that feeling, I recognized when I was sitting trying to stay still and continuously come back to breathing.” – Simon Whitfield, TRS Radio

The tasks put before you while training can be daunting. Never mind the crap that probably goes on in your head in a race. I don’t care whether you’re an 8 hour or 14 hour guy/gal, you’re going to the well at some point – your brain hits the panic button and you slow down (good old central governor), or you’ve just built up too much cognitive fatigue, and quitting time seems really nice right about now. It’s a familiar feeling if you’ve been in endurance sports for any amount of time, and that “wanting to stop” may often be more mental than physical.

There are a lot of reasons to meditate. It’s good for sleep, stress, cardiovascular health, your immune system, decreasing pain perception, enhancing attention and focus – do a quick lit search and you’ll pull up a growing body of peer-reviewed studies (just please don’t try to meditate your cancer away. Modern medicine also exists for a reason.) So…why is it so hard for most of us to actually do? Do we really not have 5-10 minutes to sit and breathe per day?

Reason #1: It’s hard. Or maybe you tried it, and it was not fun. No #$%@ it’s not fun – you’re voluntarily skipping to the point in your workout where your brain wants to tap out. While sitting still. It’s a mental struggle that most of us are uncomfortable with.

Then why do so many high-performing athletes meditate – for another means of self-torture while chasing a dream? Marginal health gains? Because the self-flagellation of an FTP test isn’t enough? Sure, maybe, but probably more what Simon Whitfield was getting at – better control over one’s brain, particularly the point at which it says “stop”.

From a science standpoint, what we’ve mostly known up until now is that meditation seems to help with athletic performance, but not really why. Our new theory? It improves your ability to detect “body prediction errors” – the difference between what you expect to feel and how you actually feel. And, in the context of exercise, your brain uses these body prediction errors (expected exertion – actual exertion) to adjust your physical output– so it makes sense that minimizing body prediction errors leads to more optimal performance.

It’s a fancy word for being attuned to the physical state of your body – and when you’re effectively processing body-relevant signals, you can learn to use them to choose a plan of action. This is critical for athletes for an obvious reason:

You know what is really good for enhancing interoception?

Particularly mindfulness, which involves the practice of open, receptive awareness and attention to internal and external sensations as they arise – often done by focusing on the sensations of breathing. A region of your brain called the anterior insula is one of the primary areas affected by mindfulness training. For example, previous research has shown reduced insula activity in response to emotional and physiological stressors and an association between decreased insula activity and greater resilience after mindfulness training.

The right anterior insula is also largely responsible for interoception – and for computing body prediction errors. There’s some cool evidence from a study of elite adventure racers in which researchers had subjects perform a continuous cognitive task while under a variety of inspiratory breathing loads – an “interoceptive stressor”. Relative to the regular subjects, the elite racers performed better on the task while under an aversive breathing load, plus showed less of a right insula response during and after the experience. Interestingly, a study of mindfulness training showed the same thing – decreased right insula activity during an aversive loaded inspiratory breathing experience; both studies also show greater insula activity in athletes/meditators during anticipation of the load. This supports the theory that elite athletes’ brains may be better at interoceptive processing – similar to the effects seen with mindfulness training.

So…can we use mindfulness meditation to alter the brains of elite athletes to make them even better at interoception? A recent study attempted to answer that question, and early results are encouraging – elite BMX riders show functional brain changes consistent with the above patterns; after a 7 week mindfulness training program, their insula activity was enhanced during the anticipation phase and after the inspiratory breathing load task, consistent with athletes’ self-reported increased interoceptive awareness. So, if we wanted to make the case for a brain marker of performance under stress, the anterior insula is it – and we can potentially enhance its performance (and perhaps, then, our body’s) by meditating.

Considering meditation now? Here’s the good news. It gets better.

Your brain adapts functionally, and your perception of the experience changes.

When you think about mindfulness compared to something like transcendental meditation, yes, mindfulness is hard and often not fun at first. It requires focus and attention while also trying to not be focused, but not trying because it’s supposed to be effortless, and then yelling at yourself for thinking about what’s for dinner every 5 seconds instead of attending to your breath, and then yelling at yourself for yelling at yourself because you’re supposed to be non-judgmentally practicing open awareness and just bringing your attention back to your breath/internal sensation of choice.

At least that’s sometimes what happens when I meditate.

So it’s no wonder that this actually stresses people out more initially – when you look at the brains of novice mindfulness meditators vs experienced mindfulness meditators, their brain circuitry for “focused attention” actually activates way more. But then all the hard work pays off. For the experienced guys who have spent hours & hours training mindfulness, it does become effortless, so much so that their resting brain activity actually starts looking a lot like the focused meditative state. A mindful brain becomes their baseline.

Will a resting-state mindful brain result in race-day magic? We still don’t quite know. But here’s the take-away: by affecting brain regions associated with interoception, it may allow you to be more acutely aware of signals from your body – which can only help.

Adrienne is a MD/PhD in Neuroscience researching stress, your brain & the neuroscience of mindfulness training. She is also a fairly decent triathlete/runner/writer and an average ultra-distance swimmer, if there is such a thing. Visit her blog: http://www.adriennetaren.com/. Follow @SeeSpondyRun